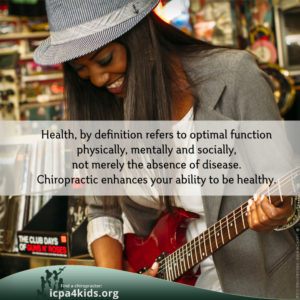 I was meeting with someone in my networking group the other day. In this group, we meet frequently to get to know each other and figure out how best to help each other out. He was wondering how he could best refer someone to me. It was obvious that he knew the usual things that Chiropractic was good for, back pain, neck pain, that sort of thing, but wanted to know more about other things. He wanted to know what were potential referrals for me, a Chiropractor.

But can it help with…?

“The thing is,” I told him, “the best thing you can say when someone reflects on a problem with their health is, ‘Have you tried Chiropractic?‘

“Most people wouldn’t have considered that what we do could help with a problem that doesn’t fit in the mold of pain. But, to be honest, Chiropractic doesn’t even treat pain! Or anything else for that matter!”

“Doesn’t treat pain?” he asked me. “What does it treat if not pain?”

“Nothing,” I responded. “Chiropractic works to help the body to function better from the inside out, which allows the body to heal. So while it may seem that it fixes back pain, it really doesn’t. It just removes the need for the pain, by helping the body heal. You wouldn’t think that taking your car to a mechanic fixes a check engine light. Not really. It just removes the need for the check engine light. The real problem was somewhere else, in the engine.”

“So if someone says to me that they have a problem with whatever, I can just ask them if they’ve tried Chiropractic?” he asked me.

“Exactly. Because there are case reports of people getting better under care with all sorts of maladies and illnesses. We don’t have to treat anything, and they can still heal.”

Have you tried Chiropractic?